What is AF fine tune and why should you use it?

AF fine tune is an option in the menu of your camera (if it’s supported by your camera, it was introduced with the D3 and D300, but it’s not supported by the D3000 and D5000 series). What it does is that it compensate that your camera and lens combination may be off by a little bit making the auto focus to miss to lesser or greater degree. Every camera body and lens is produced within a certain tolerances and if the body and lens are off to the same side, it will make the focus to miss. You might also be so lucky that they are off to opposite sides and by this cancel out the differences, but that’s not any guaranty. If you happen to own several lenses, I’m convinced that most of them need some minor fine tune and maybe a couple need considerable fine tune. Adding the correct fine tune will then compensate for any misalignment between the body and lens, making the auto focus focus correctly.

The reason why this is happening in the first place, we need to understand a little bit how a DSLR is working. Because the auto focus module (phase detection) is behind the mirror and not at the image sensors surface, the auto focus module has to predict when the image drawn on the sensors surface from the lens is in focus, and a slight misalignment of the module, mirror or the sensor itself will make the focus to miss to a certain degree. This can be compensated with the fine tune. Unfortunately it doesn’t mean that you can set one value and it will be fine with all of your lenses, as it’s a bit more complicated than I wrote above, but let us leave it at that and just accept that all lenses works a little bit different and needs different values set in the fine tune. The good thing though is that the camera body remembers the lens and what setting you set in fine tune and reloads that setting next time you attach that particular lens, so you don’t have to remember and add that number each time you change your lens.

So how should we do it in practical terms? Well, to check if focus is at the right plane, you mount your camera on a good tripod and aim towards a textured wall or tape a focus chart or whatever with good contrast on the wall and remember good lighting. Set up the camera in manual mode with the largest aperture (smallest F-number) and a shutter speed that over expose a little to make it nice and bright without losing details. Make sure the camera is at least a couple of meters away with a 50 mm lens and is at the same level as the focus point at the wall and then use live view to take a photo. If its tack sharp save it, if not try again until you get one. Then shut off live view and take a handful of photos while defocusing the lens between each time. If these are all just as good as your reference, you most likely don’t need any further fine tuning, but if all or most of them are worse than your first one shot with live view, you need to go further with fine tune. This is a quick and dirty way, not exact by any means but it gives a good indication.

The secret behind this little trick is that in live view, the camera uses a different type of auto focus (contrast detection) that is built into the sensor and in most cases more reliable to get accurate focus as it will always try to maximize contrast, and that happens only at most perfect focus.

How the check back or front focus?
If you have book shelf, cd/dvd shelf, a wall with repeated pattern, line up some bottles or batteries and set up the camera at about 45 degree. It doesn’t need to be vertical but can also be horizontal as well so you may even use the carpet on the floor. Next up you will need a tripod. Then set your camera to single focus point and choose the one in the middle, exposure in manual and set maximum aperture (smallest F-number) and dial in a little bit over exposure with the shutter speed. And also preferably base ISO. Make sure you have good and stable lighting as you need to repeat this a few times. Then, with your camera secured on the tripod, press the shutter button gently (preferably use a delay or a remote trigger to avoid moving the camera). Take a shot at no adjustment and take look at your computer screen at 100%, not on the screen on the back of your camera. Does it look as the focus is at the right spot? If it’s to close you’ll have front focus and need to dial in some positive numbers, try +5 to start with. If the focus on the other hand is too far away, you have back focus and need to dial in a negative number like -5 as a start. Continue until you are satisfied.

Another way could be straight at a plane wall, although this way you won’t see which way you are off, but a solution too. First shot at zero fine tune, and then one at each – 15 and +15. Don’t look at the photos on the screen on the back of your camera, load them up on your computer and watch them at 100%. Obviously those at -15 or +15 should be out of focus, but if any of them looks better than the other, you know that zero is not the right value for that lens. Then start narrowing down to where it should be. Let say that both look equal, then try -10 and +10 and take another look. If on the other hand -15 looks better than +15, you could try next with -10 and +5 as an example to narrow down. Continue like this until you have found the sweet spot and in the end compare with the one you shot at zero fine tune in the beginning.

A more reliable way is to buy some commercial products for checking the auto focus, not necessarily much different than mentioned above, but still a bit better as it comes with focus charts with high quality prints and step by step manual.

The third way, or is it fourth, is the use of software on a computer. This is also about the same as the others, but the comparison and more are done by the computer. Done right, this should be the most accurate and precise way.

The DIY way on top is obviously cheap, but if you are not very careful and know what you are doing, it won’t give reliable and repeatable results. It’s also increasingly more difficult the more Mpx the camera has.

The “semi” version with commercial printed charts is more reliable but also this one will be unreliable with the highest Mpx cameras. It will also cost you some money.

The Software version is obviously the best and most precise, but you need to follow the instructions carefully. As with many other things, the best option is also the most expensive one.

Comments in the end, if you are testing several lenses and all needs to be adjusted +15 to +20 or -15 to -20 or even beyond, you might have a faulty camera and needs to be sent to repair. This way it’s something wrong with your camera, not your lenses.

With Nikon cameras and Nikkor lenses, you are calibrating the camera body to your lenses as there are no data stored in the lenses itself. On the other hand with Tamron and Sigma lenses and theirs usb connected device, it is the actual lens that gets calibrated (when attached to a specific body). The good thing about calibrating the camera is that it will work with many lenses and you can share them with another camera bodies and they all work fine. With Tamron and Sigma they will be more locked into the one camera body that you calibrated them with as they are not so easily recognized by the camera body. The enormous huge benefit with the way calibrating the third party lenses by usb is that you can calibrate several focus distances and for zoom lenses, even several focal lengths. This is light years ahead of the one setting you can do in the camera body for Nikon body together with Nikkor lenses. This limitation makes it almost useless for zoom lenses, although okay for primes. In my experience the focus throughout the focal lengths and different focus distances is not consistent. At one focal length you may need -7 and at another +5 and so on, making the one setting adjustment in camera only to be a best guess average in the end. Hopefully Nikon will make more options in the fine tuning soon.

So, back to the most important question, how much does it matter and is it easily visible? Should you bother to check and put your time into it? Indeed, it’s quite visible and obviously more so at large apertures. Here are some 100% crops at 50mm f/2.8 at AF Fine Tune +10, 0 and -10 at distance of 1.20 meters. At first glimpse you might say that +10 looks better than 0, and I understand the point. But then you need to understand the nature of focus and what is called Depth of Field. DoF is the distance that is in acceptable focus, including in front of and behind the exact spot you’ve placed your focus point in the view finder. DoF is not within a sharp line in front and behind the subject, but the area that are in acceptable focus as the out of focus happens gradually. The reason why +10 looks “good”, it has the whole skull in focus because the camera was “fooled” to think that the focus was farther back (+10) than it actually was, and in the process making the distance that is in acceptable focus covering most of the skull. At AF Fine Tune 0 there isn’t anything closer to the camera to be in focus, making half of DoF covering just air and less of the skull as it should and you see that the top and side of the scull is getting more and more out of focus. This become evident in the last where DoF doesn’t even reach the skull as the camera is “fooled” to think the focus should be closer (-10), so the DoF is just covering air next to the skull. 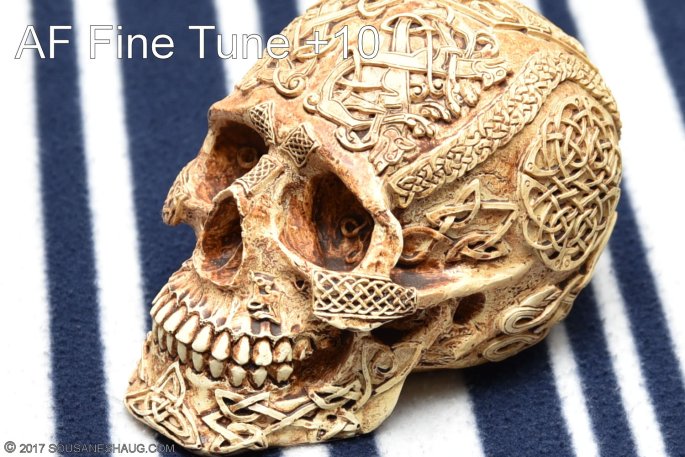 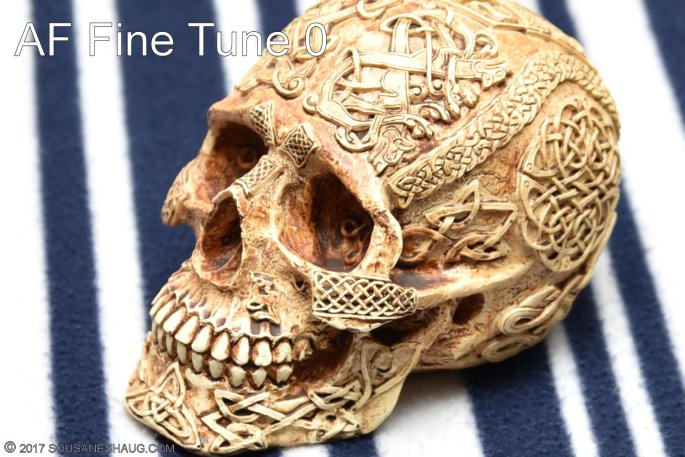 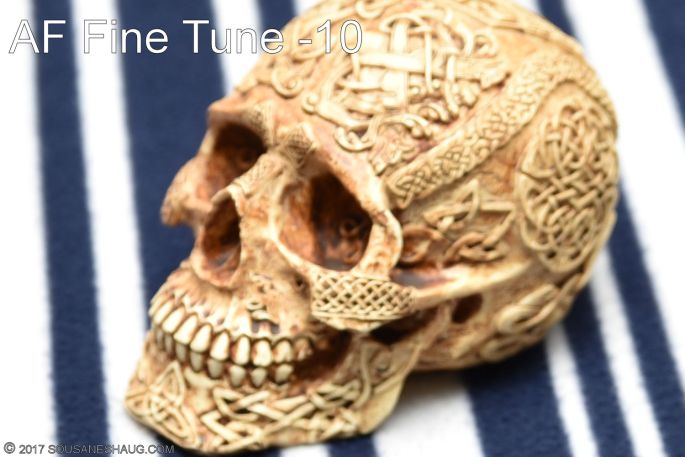 Now, notice that this is just +10 and -10 and many of the lenses I’ve tested are off by at least this much at certain focal lengths and focus distances, some are even off by more!

Also, as you can see, the fine tune doesn’t make your lens sharper, but you can move the plane of sharpness more forward or backward. At all positions of the focus ring, the lens is as sharp the lens can be somewhere and with the fine tune you can make sure it is where you want it to be.

This applies to Nikon camera bodies, Nikkor lenses, and third party lenses with F-mount only. I know there are some similar options with Canon, Olympus, Sony and Pentax too, but don’t know enough details to say this applies to all.

Now I’m in the process of learning and using Reikan Focal, automatic calibrating software and also Tamron Tap-In Console to fine tune Tamron Lenses. Articles will be posted later with my experiences. 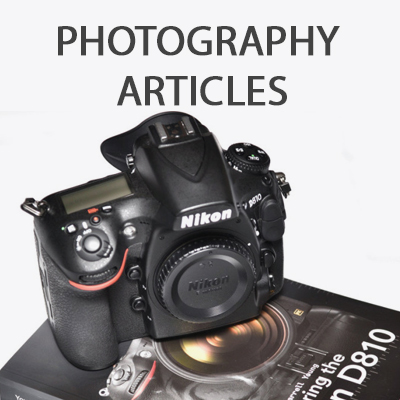 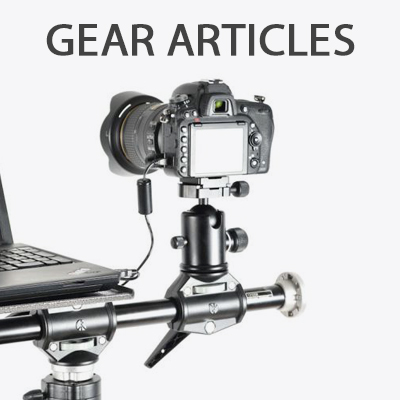